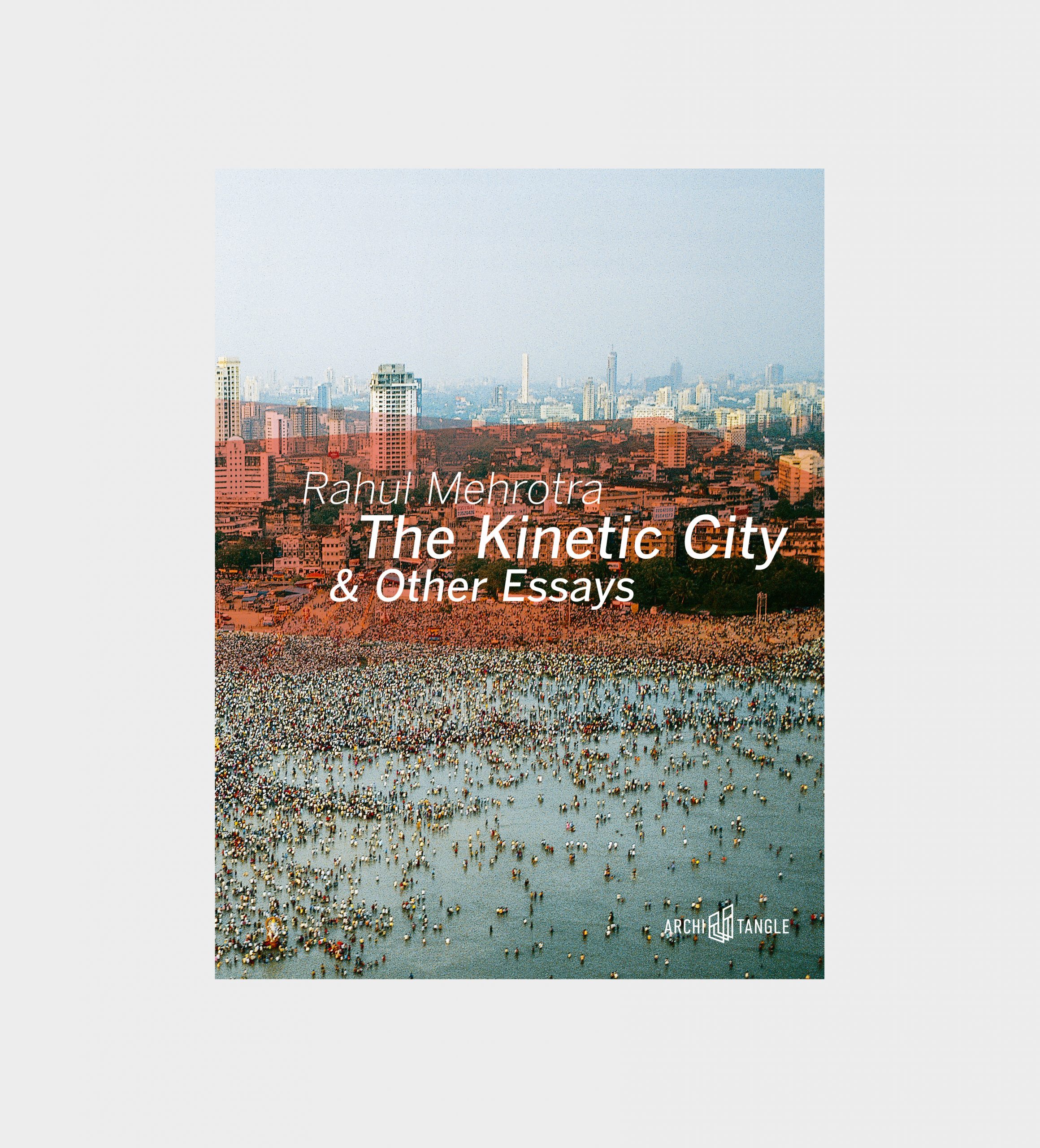 The Kinetic City & Other Essays

With a foreword by Ranjit Hoskote and an afterword by Kaiwan Mehta.

This book presents Rahul Mehrotra’s writings over the last thirty years and illustrates his long-term engagement with and analysis of urbanism in India. This work has given rise to a new conceptualization of the city. Mehrotra calls it the Kinetic City, which is the counterpoint to the Static City, as familiar to most of us from conventional city maps. He argues that the city should instead be perceived, read, and mapped in terms of patterns of occupation and associative values attributed to space. The framework is established in this publication by Rahul Mehrotra’s anchor essay, which draws out its potential to “allow a better understanding of the blurred lines of contemporary urbanism and the changing roles of people and spaces in urban society.”

The emerging urban Indian condition, of which the Kinetic City is symbolic, is examined in this publication through a selection of writings curated by Mehrotra, which led to and then subsequently built on this framework. The theory is reinforced by different perspectives that Rahul Mehrotra brings to bear on discourse, and on the profession of architects and urban designers, thanks to his career as an architect, urban designer, conservationist, educator, and advocate for the city. From essays such as “Evolution, Involution and the City’s Future: A Perspective on Bombay’s Urban Form” to more generally applicable ruminations such as “Our Home in the World,” this book offers an in-depth look at the last thirty years of reflection and theorizing behind Mehrotra’s work.

The publication is divided into three parts. The anchor essay, “Negotiating the Static and Kinetic Cities,” and other contributions (twenty-one in total) make up the main section. A second book within the book is dedicated to an expansive complimentary photo essay by the photographer Rajesh Vora, illustrating the key themes transaction, instability, spectacle, and habitation. The last section presents an illustrated bibliography of Rahul Mehrotra’s wide range of research and writings.

Rahul Mehrotra is a Professor of Urban Design and Planning and the John T. Dunlop Professor in Housing and Urbanization at the Graduate School of Design at Harvard University. He is the founder principal of RMA Architects, which has studios in Mumbai and Boston. RMA Architects, was founded in 1990 and has designed and executed projects including government and private institutions, corporate workplaces, private homes, and unsolicited projects driven by the firm’s commitment to advocacy in the city of Mumbai. In 2018 RMA Architects were awarded the Venice Biennale juror’s ‘Special Mention’ for ‘three projects that address issues of intimacy and empathy, gently diffusing social boundaries and hierarchies’. His most recent book is titled Working in Mumbai (2020) and is a reflection on his practice as evolved through its association with the city of Bombay/Mumbai. Since 2014, Mehrotra has been a member of the International Committee of Architecture Critics (CICA).

Rajesh Vora, a graduate of the National Institute of Design, India, began his career in Visual Communications and has been photographing for over 30 years. A deep-rooted interest in the environment and disappearing habitats has influenced his photographic practice. Vora worked as a photographer with COLORS magazine for over 15 years and often contributed as a researcher and writer. Commissioned to document architecture projects in India and Bangladesh with social relevance, for The Aga Khan Award for Architecture Foundation, Geneva.
His concern with urban issues led to myriad collaborations and projects with architects, environmentalists and filmmakers espousing critical views on the social, cultural and political situation in India. His ongoing project, Everyday Baroque, exhibited in 2016 at Photoink Gallery, New Delhi, takes him to Punjab to document the homes of the Punjabi Non-resident Indians.

Ranjit Hoskote has been acclaimed as a seminal contributor to Indian art criticism and curatorial practice, and is a leading Indian poet. He is the author of more than thirty books, including Vanishing Acts: New & Selected Poems 1985–2005 (Penguin, 2006), Central Time (Penguin/Viking, 2014), Jonahwhale (Penguin/Hamish Hamilton, 2018; published by Arc in the UK as The Atlas of Lost Beliefs, 2020), and Hunchprose (Penguin/Hamish Hamilton, 2021). His translation of a fourteenth-century Kashmiri woman mystic’s poems has appeared as I, Lalla: The Poems of Lal Ded (Penguin Classics, 2011).
Hoskote curated India’s first-ever national pavilion at the Venice Biennale (2011). He co-curated the 7th Gwangju Biennale with Okwui Enwezor and Hyunjin Kim (2008). Among his curatorial projects are a mid-career retrospective of Atul Dodiya (National Gallery of Modern Art, New Delhi, 2013), a monographic exhibition of M. F. Husain (Mathaf: Arab Museum of Modern Art, Doha, 2019), and three transhistorical and trans-genre exhibitions developed for the Serendipity Arts Festival, Goa: Terra Cognita? (2016), Anti-Memoirs (2017), and The Sacred Everyday (2018). With Rahul Mehrotra and Kaiwan Mehta, Hoskote co-curated the exhibition/conference platforms The State of Architecture: Practices and Processes in India (National Gallery of Modern Art, Mumbai, 2016) and State of Housing: Aspirations, Imaginaries and Realities (Max Mueller Bhavan, Mumbai, 2018).

Kaiwan Mehta is an academic, theorist, and critic in the fields of visual culture, architecture, and city studies. He is the Managing Editor of the magazine Domus (India-edition); he is Professor and Programme Chair of the Doctoral Programme at the Faculty of Architecture, CEPT University, Ahmedabad. He is the author of Alice in Bhuleshwar: Navigating a Mumbai Neighbourhood (Yoda Press, 2009) and The Architecture of I M Kadri (Niyogi Books, 2016) and is currently working on two other biographies of architects, Sen Kapadia and Jitendra Mistry. Mehta was Jury Chairman, 2015–17, and 2017–19 at the international residency programme for the arts and sciences at the Akademie Schloss Solitude, Germany. He has curated several exhibitions on architecture, urbanity, and design histories in the last few years in India and abroad. Mehta has conducted seminars and keynote lectures internationally including the Centre Pompidou, Paris, and the Cornell University, New York.