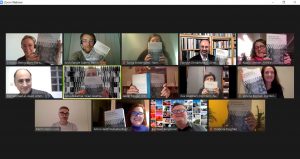 The Architecture of Coexistence book launch was an incredible event that brought together ten panelists from all around the world. Full advantage of the online facilities we have become accustomed to in recent months was taken to make the event as accessible as possible. 130 people registered for the event which was held on the 15th of December on Zoom, while others were able to follow on the live stream at architangle.com and on facebook live. Our own Cristina Steingräber moderated the event, which seamlessly integrated addresses by the different panelists, films depicting the projects presented in the book, and a discussion during which time ran out before the questions did.

Farrokh Derakhshani, director of the Aga  Khan Award for Architecture, opened the event with some words before a short film break on the cemetery in Altach. Azra Akšamija, Director of the MIT Future Heritage Lab and also editor of the book in question followed, launching a conversation with Verena Konrad, Director of Vorarlberg Architecture Institute (vai). The following film on Superkilen Park was particularly notable, as it premiered at the book launch.  Kai-Uwe Bergmann, partner at BIG-Bjarke Ingels Group), Jakob Fenger of Superflex, and Martin Rein-Cano of Topotek 1 then joined in the conversation about this topic. After another short Film Break to introduce the White Mosque in Visoko, we heard from Amra Hadžimuhamedović, Director of the Center for Cultural Heritage, International Forum Bosnia. Azra Akšamija closed the planned part of the programme with a discussion with Eva Grabherr, from okay.zusammen leben and Mohammad al-Asad of the Center for the Study of the Built Environment in Amman. Following this, the floor was opened for discussion and general questions from the public.