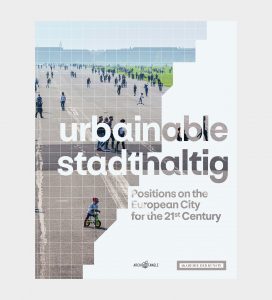 urbainable/stadthaltig – Positions on the European City for the 21st Century

urbainable/stadthaltig
Positions on the European City for the 21st Century

Constant change is what marks the history of the European city. Over centuries, architecture’s reactions to social disruptions—natural disaster, plague, or war—have fashioned the city into an engine of civilization. And bound up with this has been the promise of economic independence, social cohesion, and individual freedom.

Now fundamental challenges, such as climate change, are bringing cities face to face with new transformations that call into question the continuity and sustainability of the ethical foundations underpinning urban ways of life. Bold and decisive steps are needed.

How far can urban planning, landscape planning, and architecture foster the vital processes of change? How can the city offset possible losses caused by altered lifestyles, integrate new technologies, or rehearse new forms of behaviour and ultimately sublimate them into a functioning culture?

In this volume, the members of the Architecture Section of the Akademie der Künste Berlin and their invited guests from all over Europe introduce their positions by means of projects, visions, and manifestos. Essays by selected authors with different viewpoints supplement the practical discourse.

With a photoessay by Erik-Jan Ouwerkerk.

The publication is accompanying the exhibition “urbainable – stadthaltig” by the Akademie der Künste from September 5 until November 22, 2020 in Berlin, Germany.